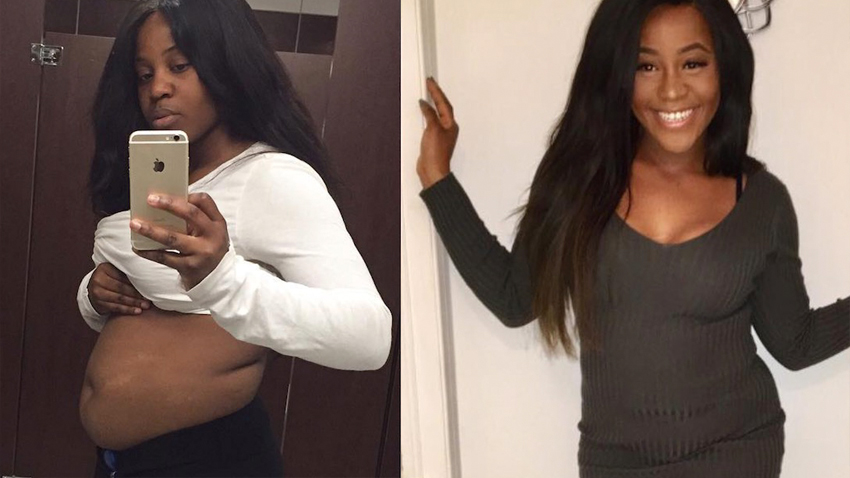 Labelle grew up her whole life as the “bigger” friend and sister, always feeling like the odd one out and feeling lucky when guys would even look at her. She wanted to be more like her thinner sisters and cousins.

After years of “failing” and diets not working out, she was determined to look like the girls she saw on her Instagram feed. Perhaps a sign, her new job had a gym in the same building and she used that as a starting point on her weight loss journey.

Labelle started eating right and exercising every day and left previous failed attempts in the past to lose an incredible 40 pounds and keep it off! Read below to find out exactly how she did it. 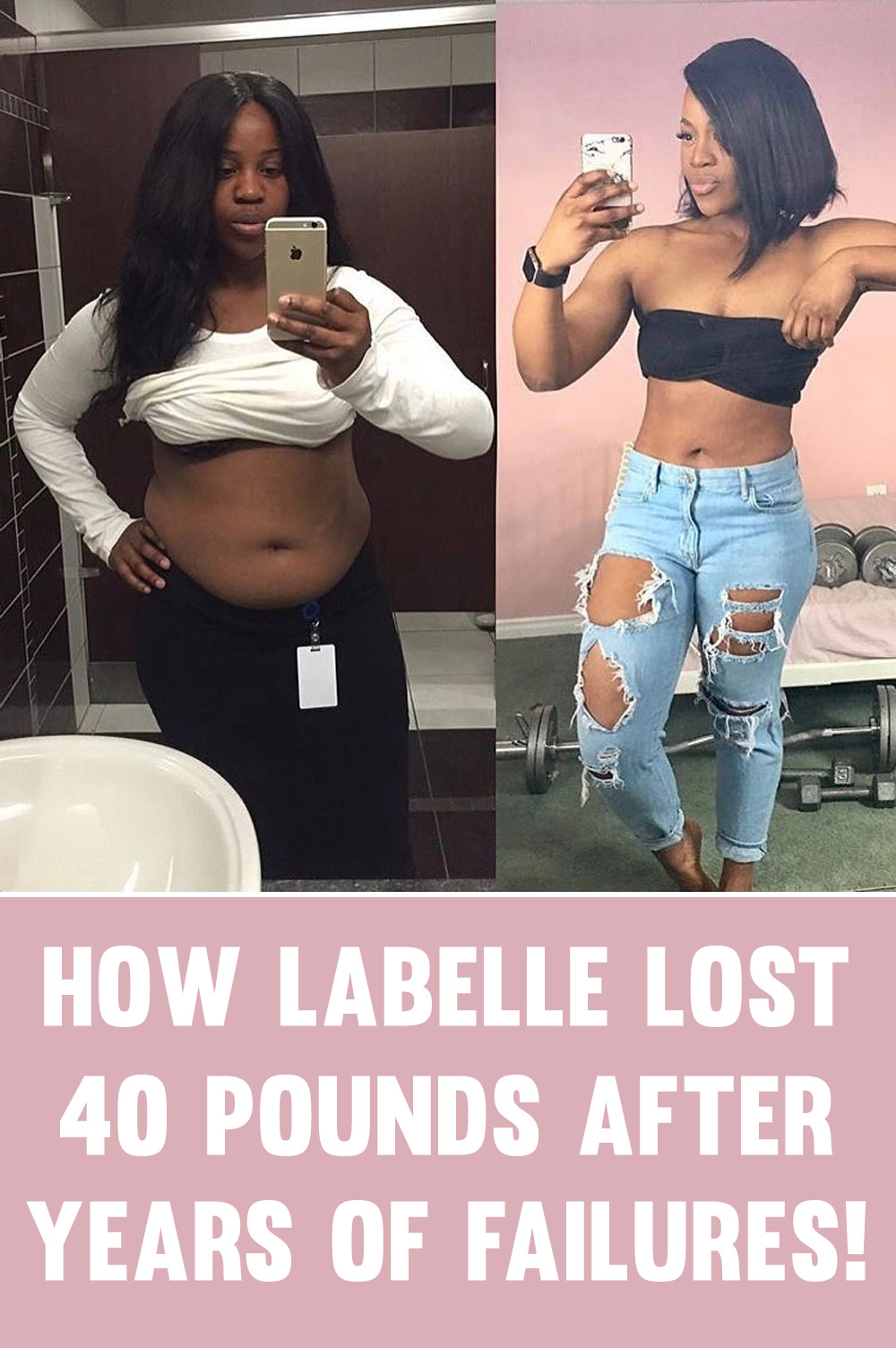 Labelle discussed what life was like growing up with AfroGirlFitness, being bigger than her friends and struggling with the issues that it created. 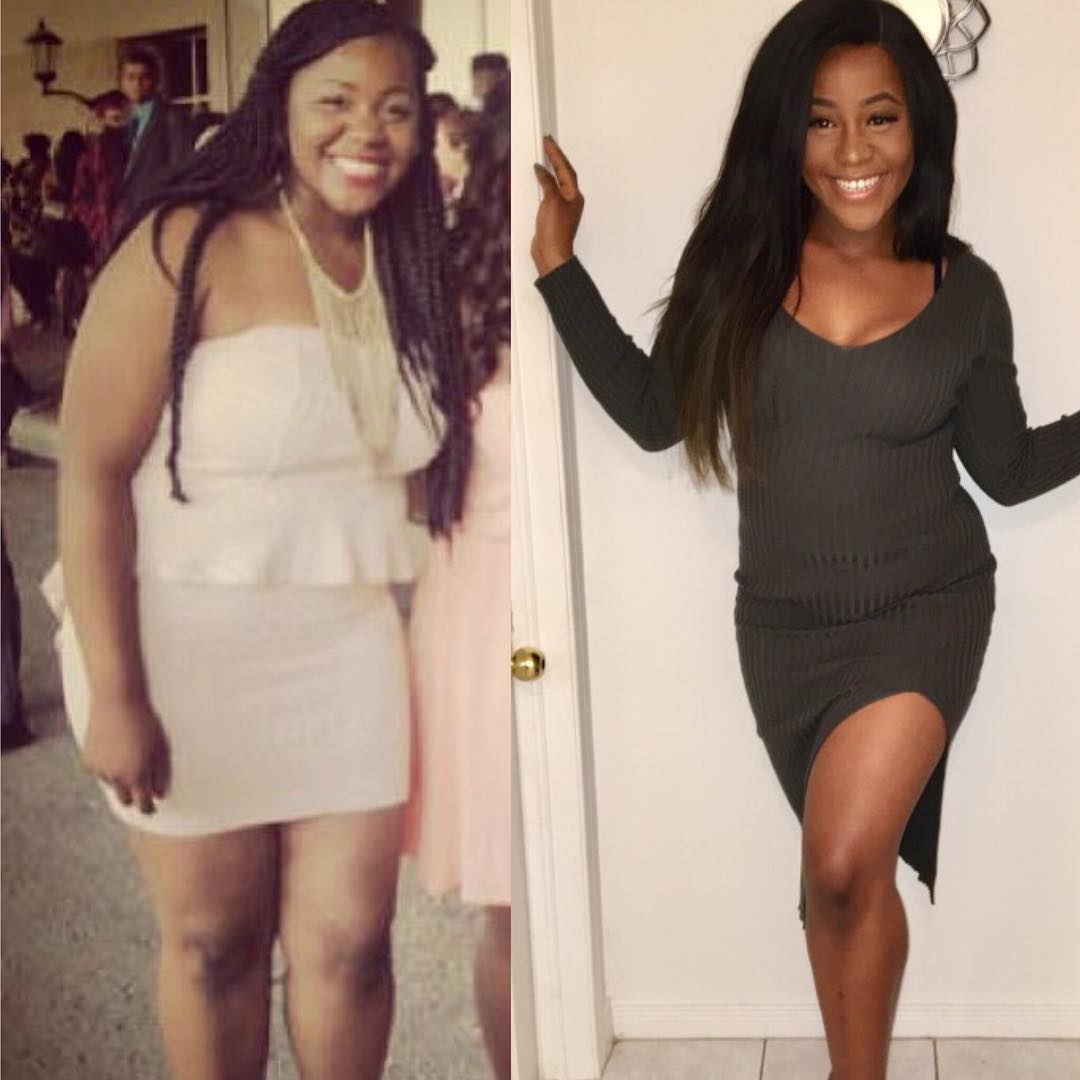 “Growing up I was always the big girl in the group. Whenever it was time to try clothes on, it would always fit my sisters or cousins and I would feel left out; for that reason, I hated shopping. Whenever it came to guys, I was never the pretty girl; but always the cool friend. I grew up seeing guys go for my sisters more because they were thinner than me. I was always insecure about my weight so whenever a guy would go for me, I would hold on to them because I felt lucky to have a guy even look at me. I looked at other girls and wished to be like them and so I promised myself to lose weight by the time I turned 25 (right now I am 21)”

Labelle had tried to lose weight before, but her failures led her down a path which could have led to an eating disorder. 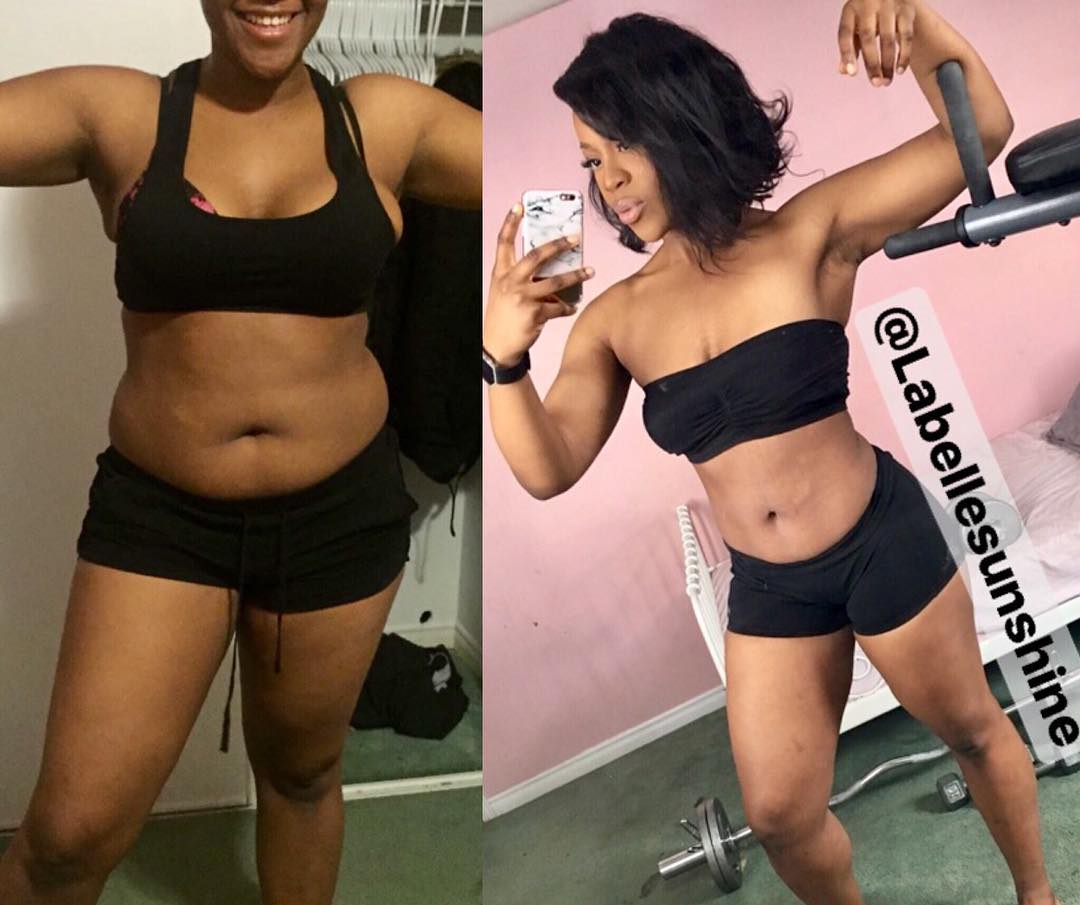 “One day I was admiring the bodies of girls on Instagram and convinced myself that it could also be me. I tried to lose weight many times but I never succeeded. I was so desperate to shed the weight that I was prepared to try anything; even making myself vomit.”

It wasn’t until a new job, which luckily had a gym under the same roof, that Labelle got into fitness. Taking the gym’s presence as a sign and inspired by her healthier co-workers, she started to go with them as they worked out during lunch. 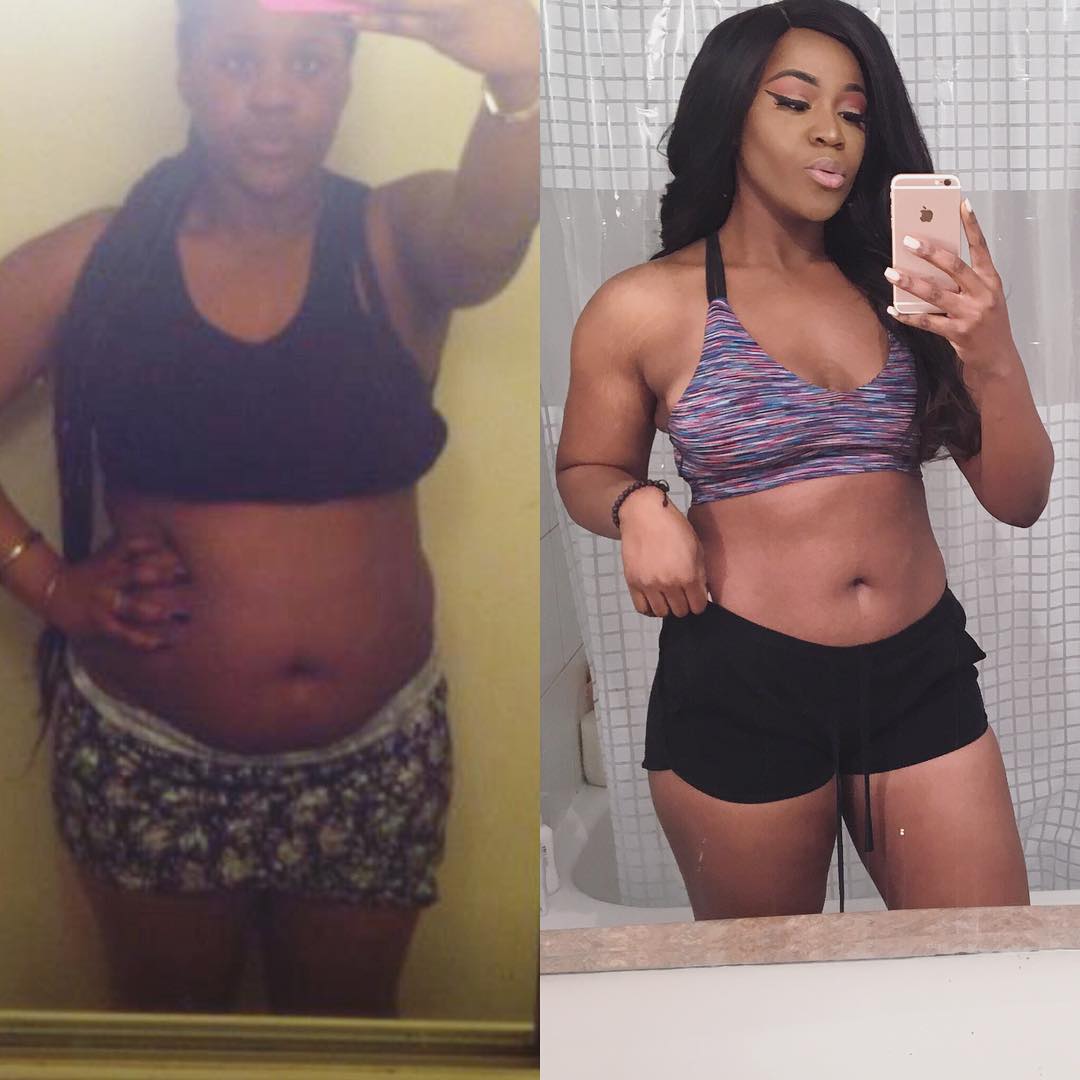 “Summer 2016 was when my life changed for the better. I got a new job and in the same building was a gym. I would always see my co-workers going to the gym during lunch time and I would tell myself that, it’s either I stay this way forever or take the opportunity that God had given me. I enrolled and joined my colleagues during lunch break and eventually after work also. Although I caught the gym bug, I was still eating unhealthily; but a month into my gym regime I started to meal prep.”

Labelle started out with no knowledge of what to do in the gym, but starting a class and falling in love with getting fit, she quickly learnt the ropes and started a strict fitness regime. 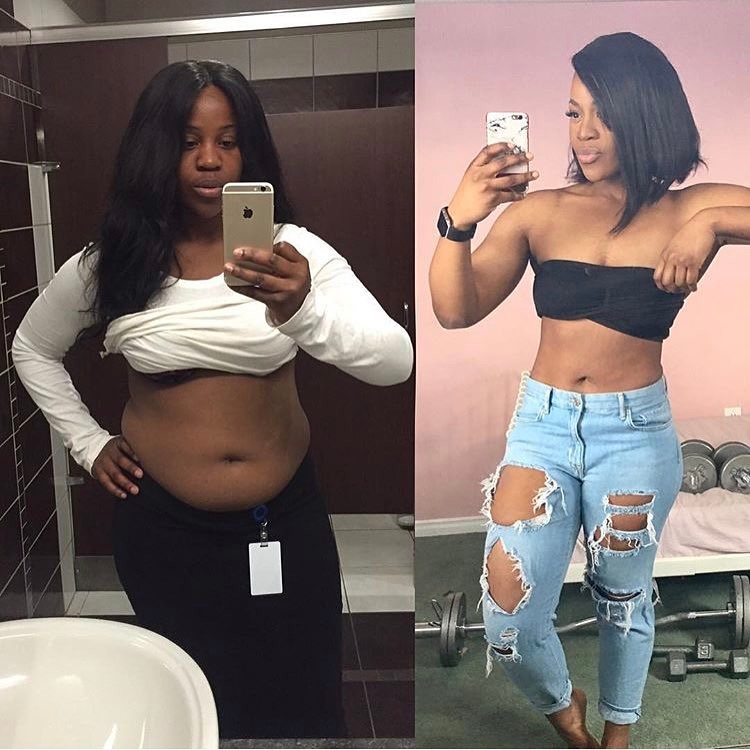 “I had no clue as to what I was doing in my initial days at the gym, so my colleagues and I enrolled on to a group boot camp for 3 days of the week; and the remaining days we’d workout at the gym. I usually followed what my colleagues did as I wasn’t familiar with the gym machines. Seven months into my fitness life, I did mostly running on the treadmill and group boot-camp; but as I became more knowledgeable, I started having legs day, arms day and backs day. Each day I would focus on one of those muscle groups and finish with abs and 30 minutes of cardio. I started with running for 20 minutes and now I can do 30 minutes.”

Once Labelle had her training sorted, she turned her attention to her diet, deciding to cut back on unhealthy meals and start calorie counting. 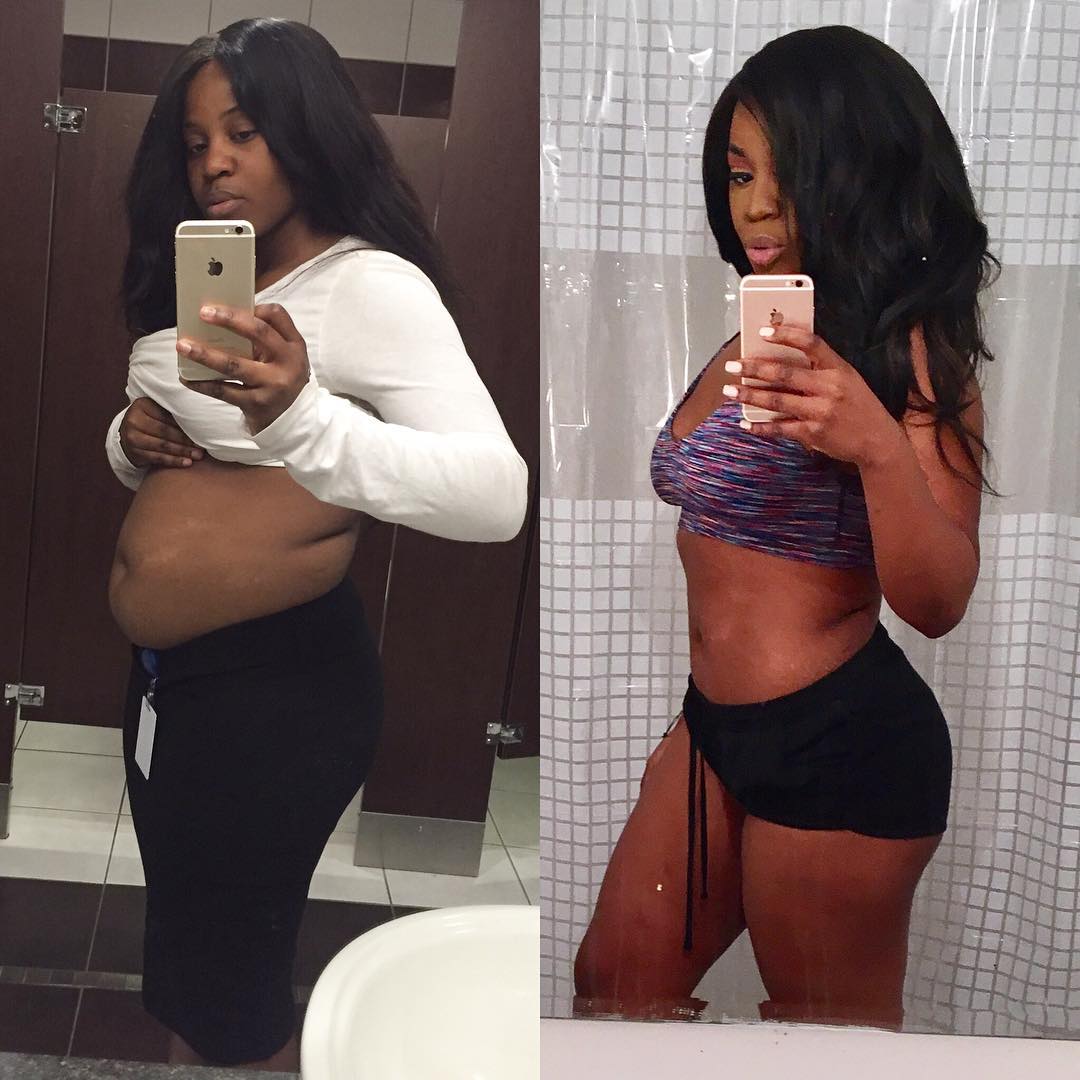 “When I started working out, it took me a month to start eat healthily. I started meal prepping to control my food intake; but on weeks that I didn’t have money for meal preps, I utilised the foods available at home. When I started out on my weight loss journey, I restricted my diet to 1200 calories a day. Currently in my diet I have restricted carbs, dairy and sugar. I have gone from drinking two litres of water, to three to four litres of water and two cups of green tea every day.”

“I started my journey in May 2016; so, nine months since my journey begun. My starting weight was 200 pounds and now I weigh 168; 32 pounds lost in total. Although I feel it is more, (because I have gained muscle) this isn’t reflected on the scale but the dramatic change can be seen in my pictures.” 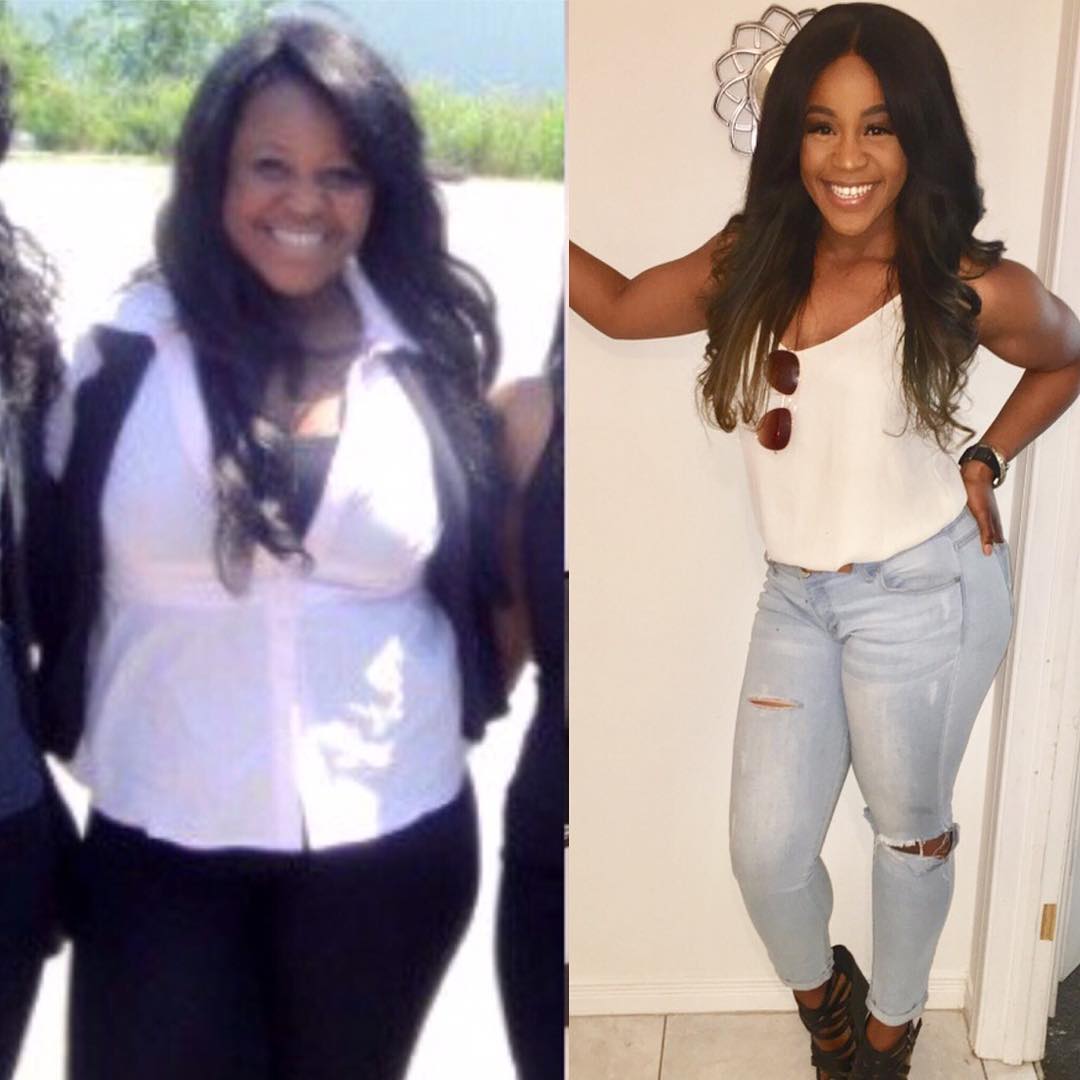 Far from being an easy process, Labelle had struggles throughout her weight loss journey. Getting discouraged when the scale didn’t drop as much as she’d like, she started to compare photos rather than focus on the numbers.

“Eating right and going to the gym is only 20% of the challenge. I never thought that I would have to battle so much with my mind. There were days I felt skinny and on other days, my mind would tell me otherwise. I really had to fight with my mind and tell myself to keep going. At first I was so fixated on the scale, that I would become discouraged if I didn’t lose as much as expected; or if I fell short on my diet or performance at the gym. I had to tell myself that it is a lifestyle change, so if I had bad days it’s okay because tomorrow is a fresh opportunity to continue the right path. I stopped focusing on the scale because of the fluctuations and started to focus on how I felt and compared pictures.” 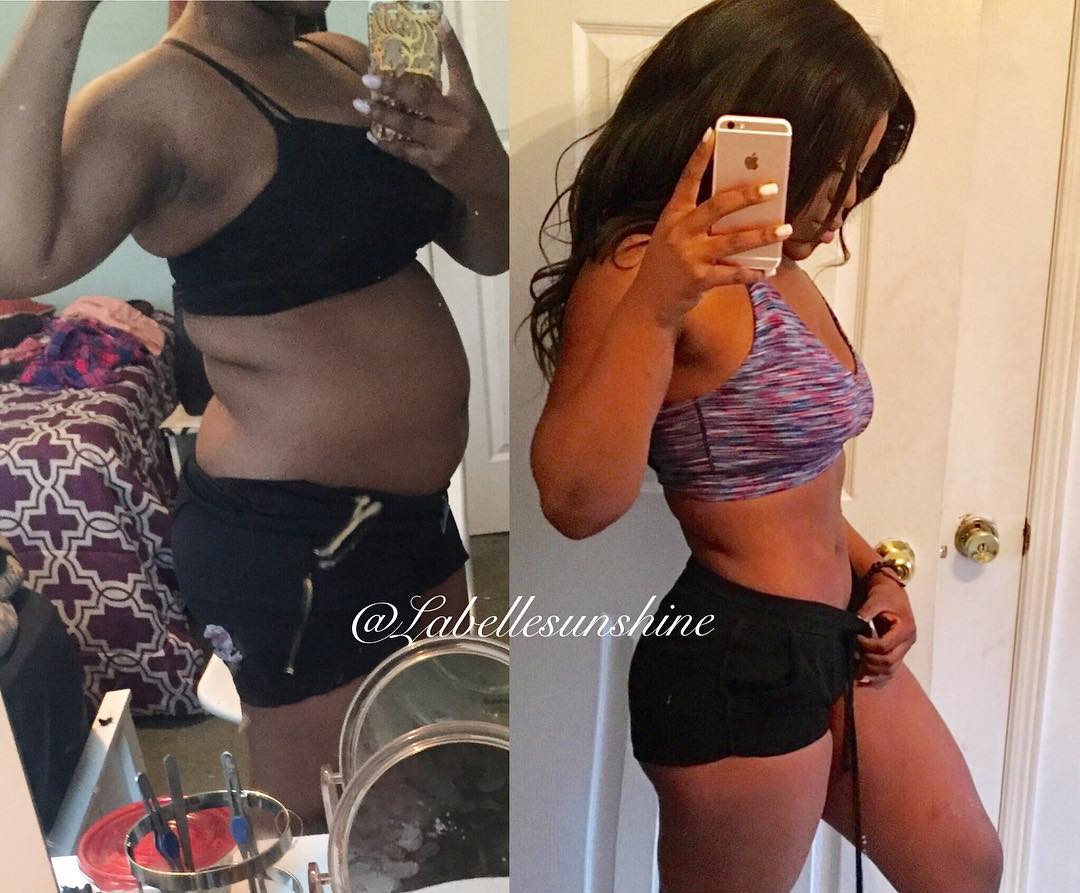 “I also stopped comparing my progress with that of others and set my mind on my own goals. I still do battle with my mind from time to time but I’m learning self-love. You will never be successful on your journey if you keep being hard on yourself and don’t love what you see in the mirror. If you continue being hard on yourself, you may drive yourself to quit before seeing results. I have been slow and steady on my journey because I want lasting change. I am at a point that I have learnt to love myself despite my weight fluctuations.”

As well as loving the physical changes, the process also helped Labelle get tougher mentally and helped her see herself in a more positive light. 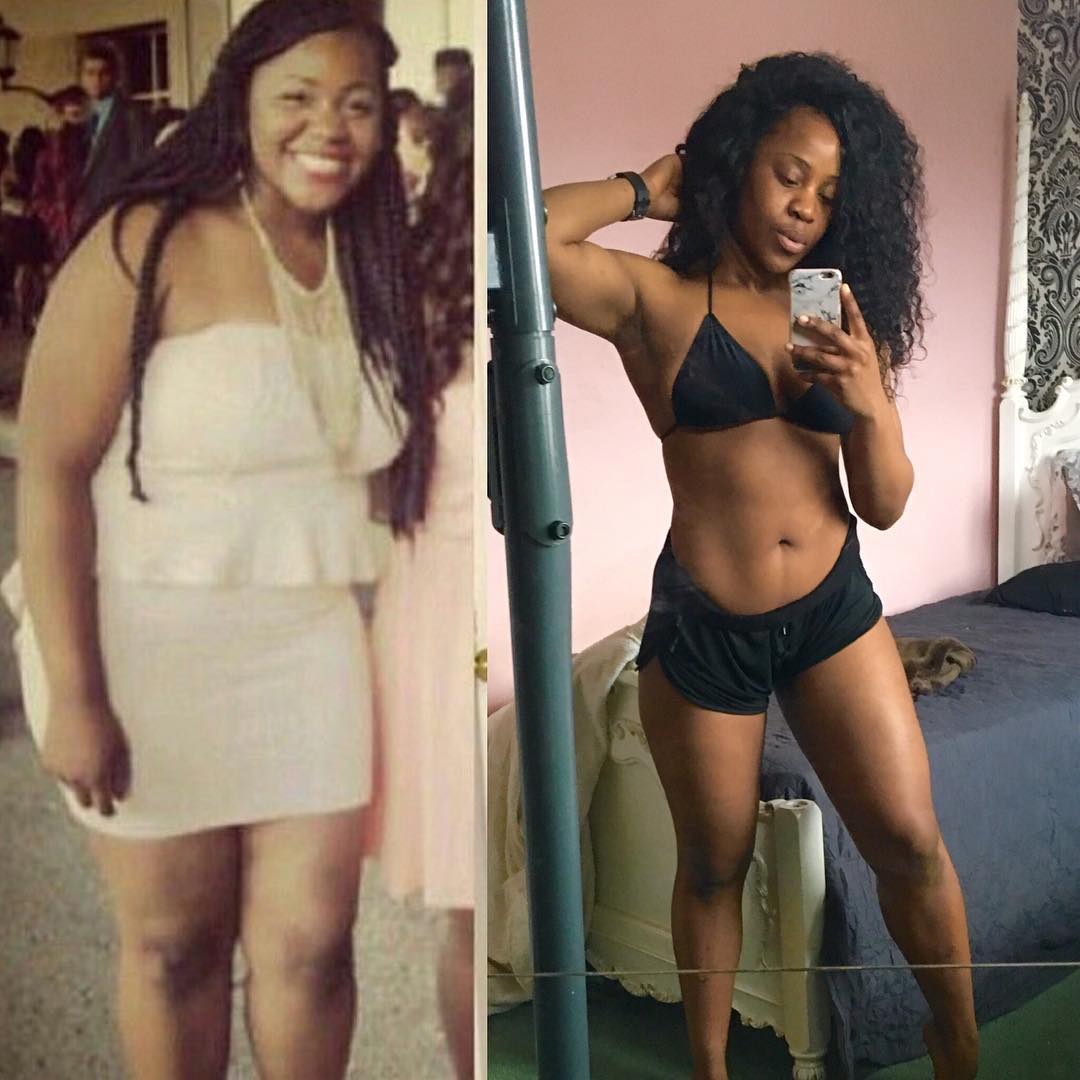 “Mentally I am stronger, I believe in myself so much more and I’ll never allow someone to look down on me. There were so many times that I had to pick myself up from tears and keep going; I’m happy for it, as it has made me a stronger woman. Although I now get a lot of male attention, I no longer feel ‘lucky’ as I know my self-worth. Health wise, I feel so much better in my body.”

“Honestly speaking, I thought that people around me would cheer me on when I started on my journey. I saw that not everyone will notice or care when you lose one or two pounds, so I decided to become my own cheer leader. My family were generally quite supportive; especially my mum; however, I mostly looked to God and within myself for the motivation to continue.” 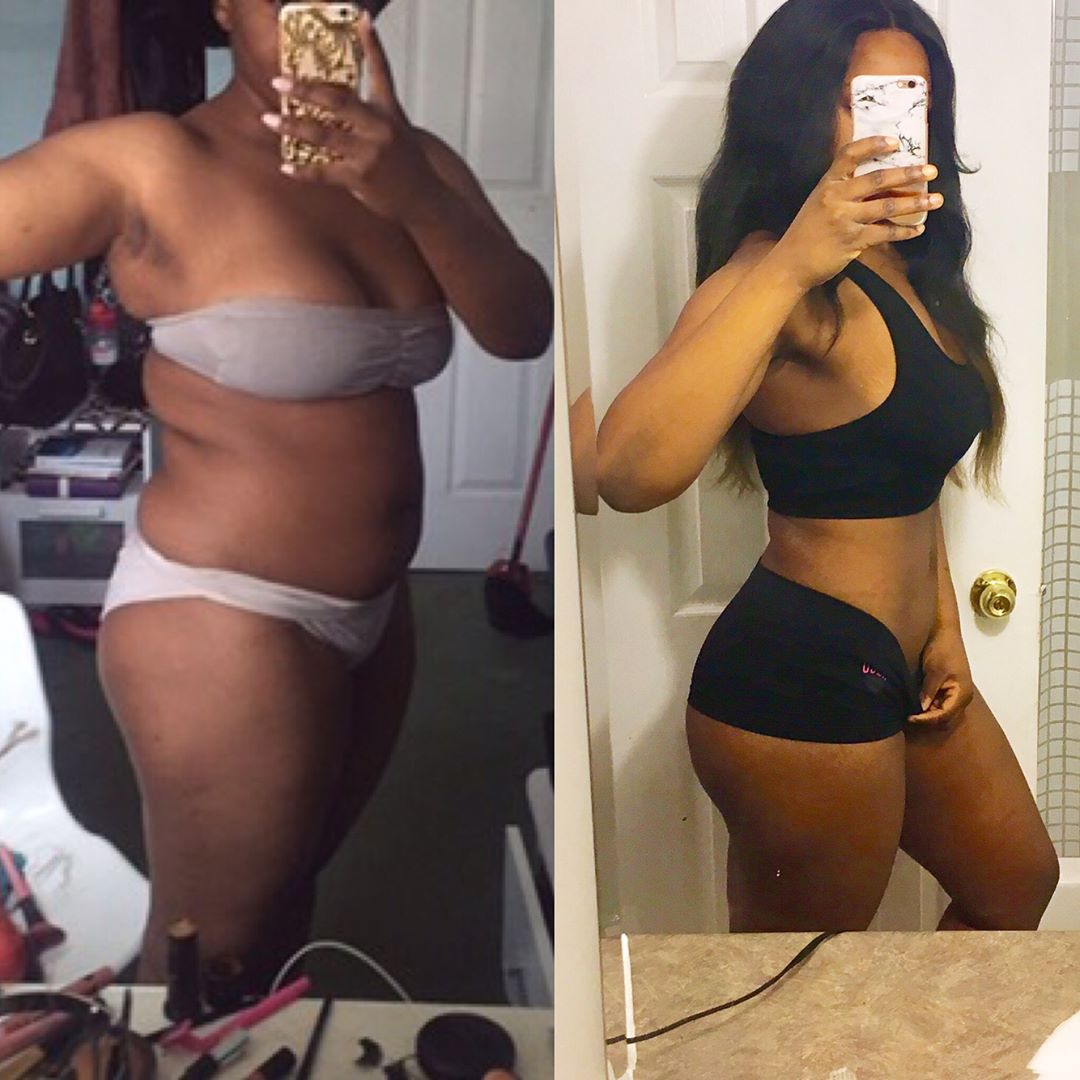 Labelle believes it’s a stronger mind and becoming your own motivation that is the true key to success, wanting others to spur you on will only take you so far, you need to support yourself.

“I would advise others to be mentally prepared as there are days you’ll feel discouraged; either by a bad day at the gym or one cheat meal too many. Your mental attitude matters so much on your journey because what the mind thinks, the body follows. Always believe in the power of bouncing back; rest but don’t give up. Let the reason you started be the reason you keep going. Lastly, don’t expect the world to cheer you on; be your own cheer leader and celebrate your mile stones.”