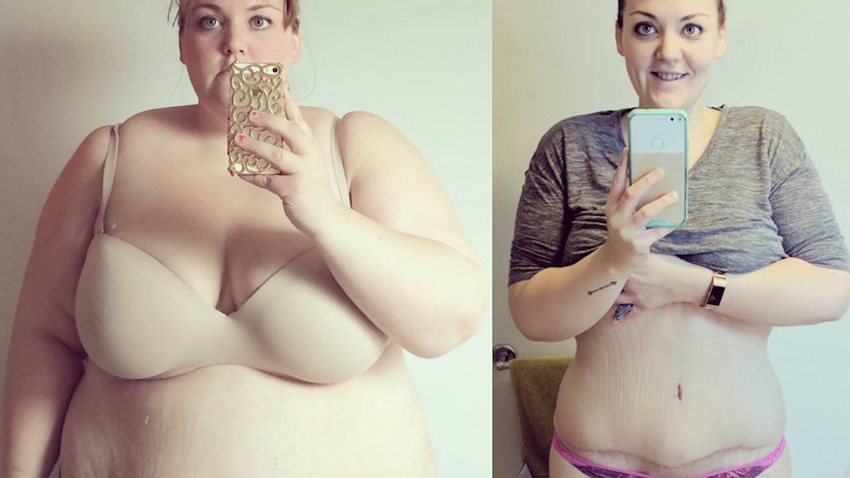 Labelle Reveals How She Finally Lost 40 Pounds After Years Of Failures!

Mallory Buettner underwent a Gastric Bypass Surgery in 2014, after she tipped the scales at just under 400 pounds. She was always the ‘bigger’ kid in class and turning to junk food as a means of comfort.

The primary school teacher had never worn a bikini in her life, and after losing 210 pounds following the weight loss surgery, she quickly went out and bought 5.

Mallory lost so much weight, even more than the Doctors thought possible, that she decided to have a tummy tuck and brachioplasty to complete her transformation and finally be happy with the body she was in. 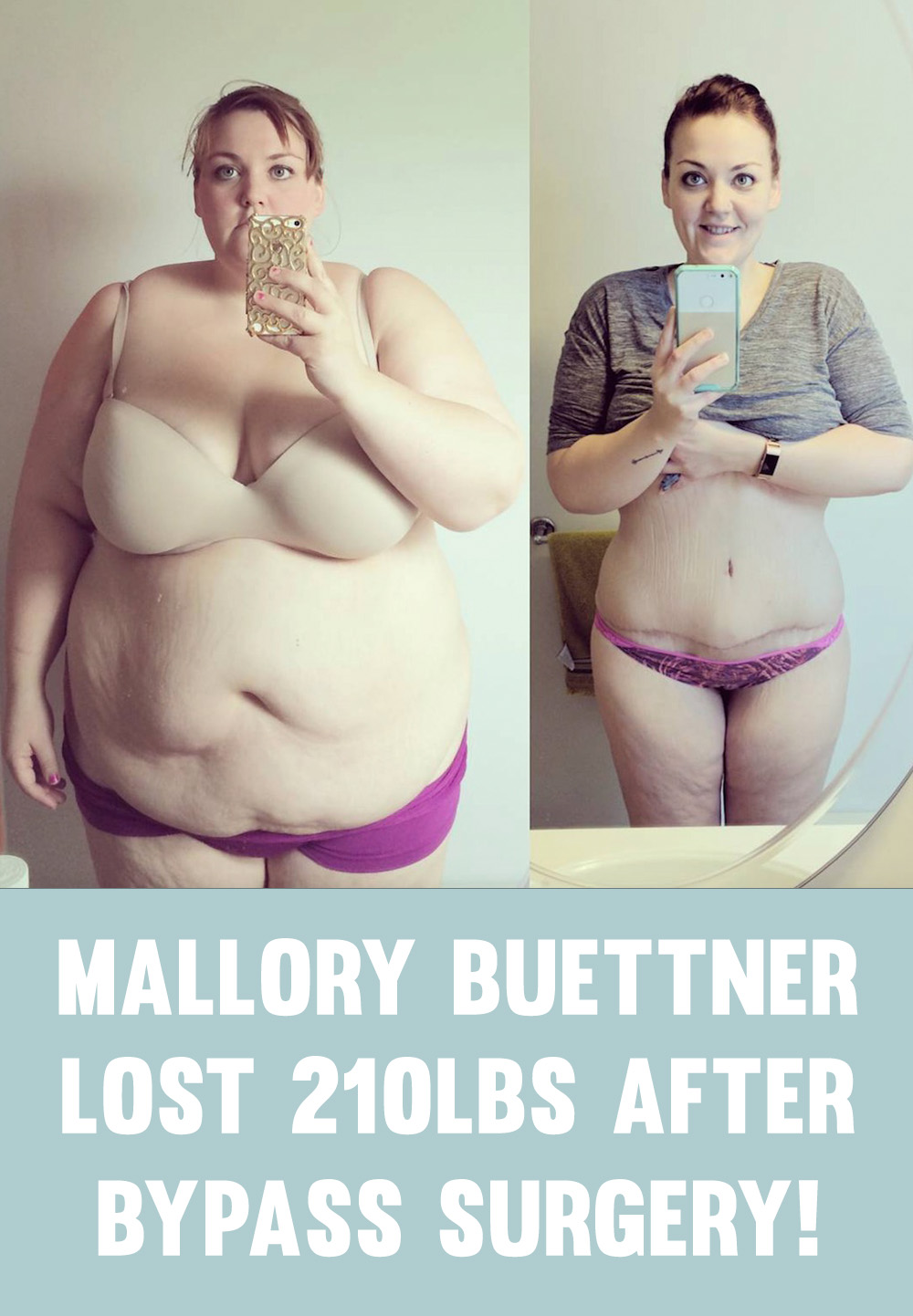 Mallory opened up to the DailyMail about her decision for weight loss surgery, how it’s an aid and not a solution and how she had never once worn a bikini before. 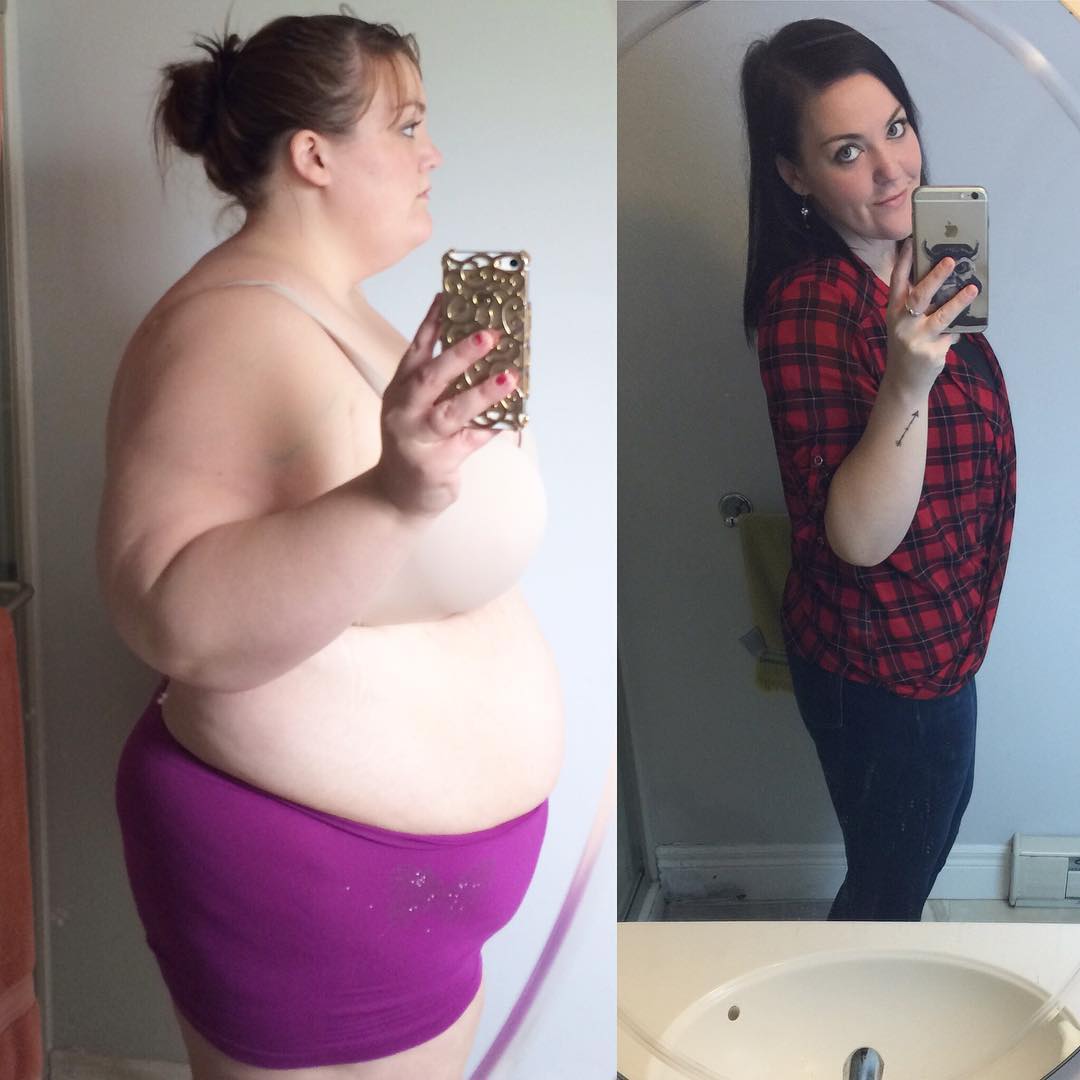 “I had never worn a bikini in my life, and I had a dreaded putting on a bathing suit even in my own hot tub in the back yard.”

Mallory’s weight loss concerns started when she was young. The first time she tried to lose weight was when she just 8 years old, but her love of junk food, like pizza, chips and fizzy drinks caused those efforts to fail and her weight to explode.

“I was always bigger. I have an older sister and we have always eaten similar foods but she was always a normal size. At school I was the biggest kid in the class. I was aged eight-years-old the first time I went on a diet. My mum always made an effort to feed me lean meals but when I was little, but I liked to eat chips, pizza and pop.” 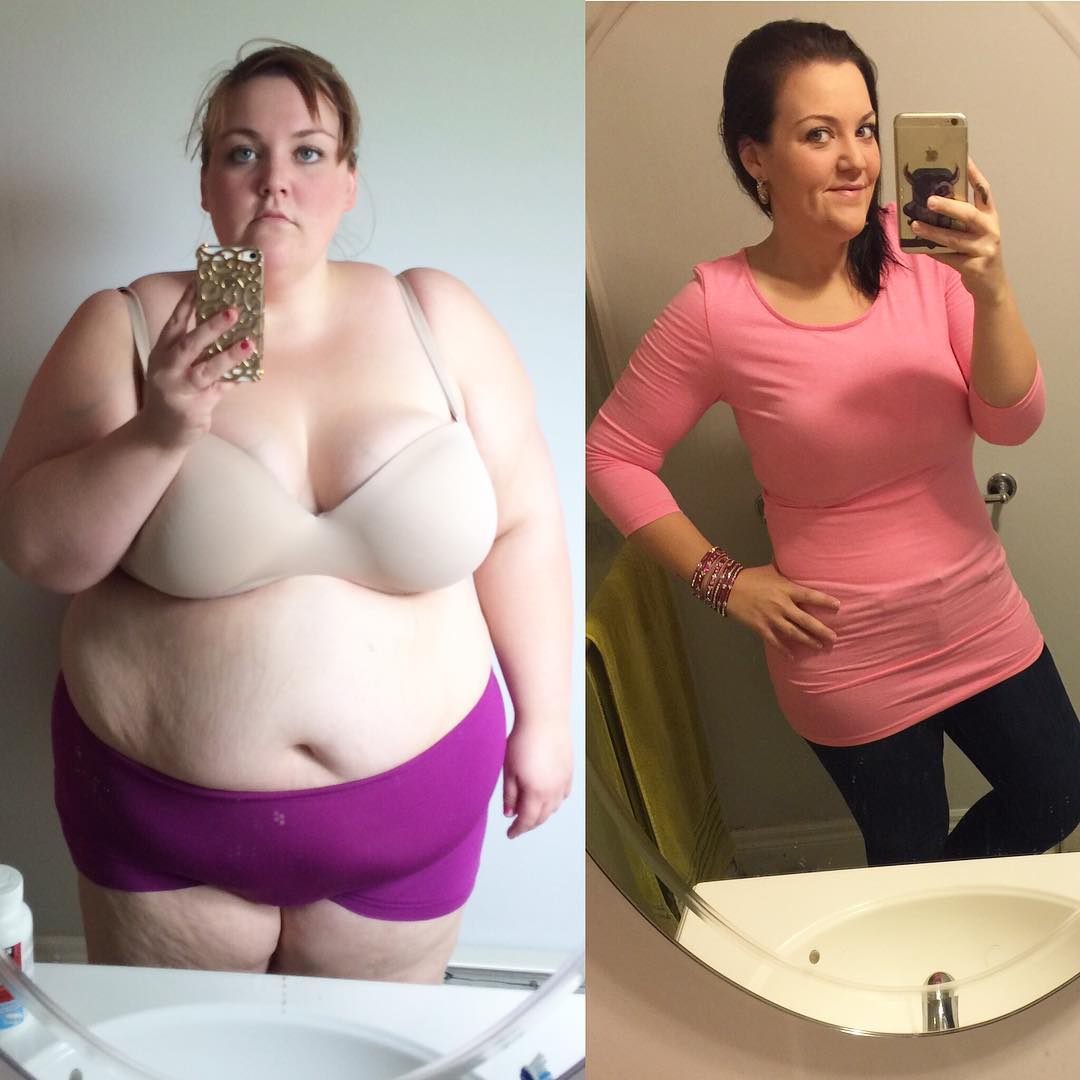 “Then at I high school I drank a lot of ice coffees and ate McDonald’s.”

Aged just 10 years old, Mallory already weighed 200 pounds and had a hugely diminished quality of life. At 18, the scale went up to 285 pounds and by the time she graduated University, she was 367 pounds.

Mallory tried many different diets and plans to lose weight, but nothing worked and she gained all the weight back and then some. Finally nearing 400 pounds, she decided she needed to do something drastic. 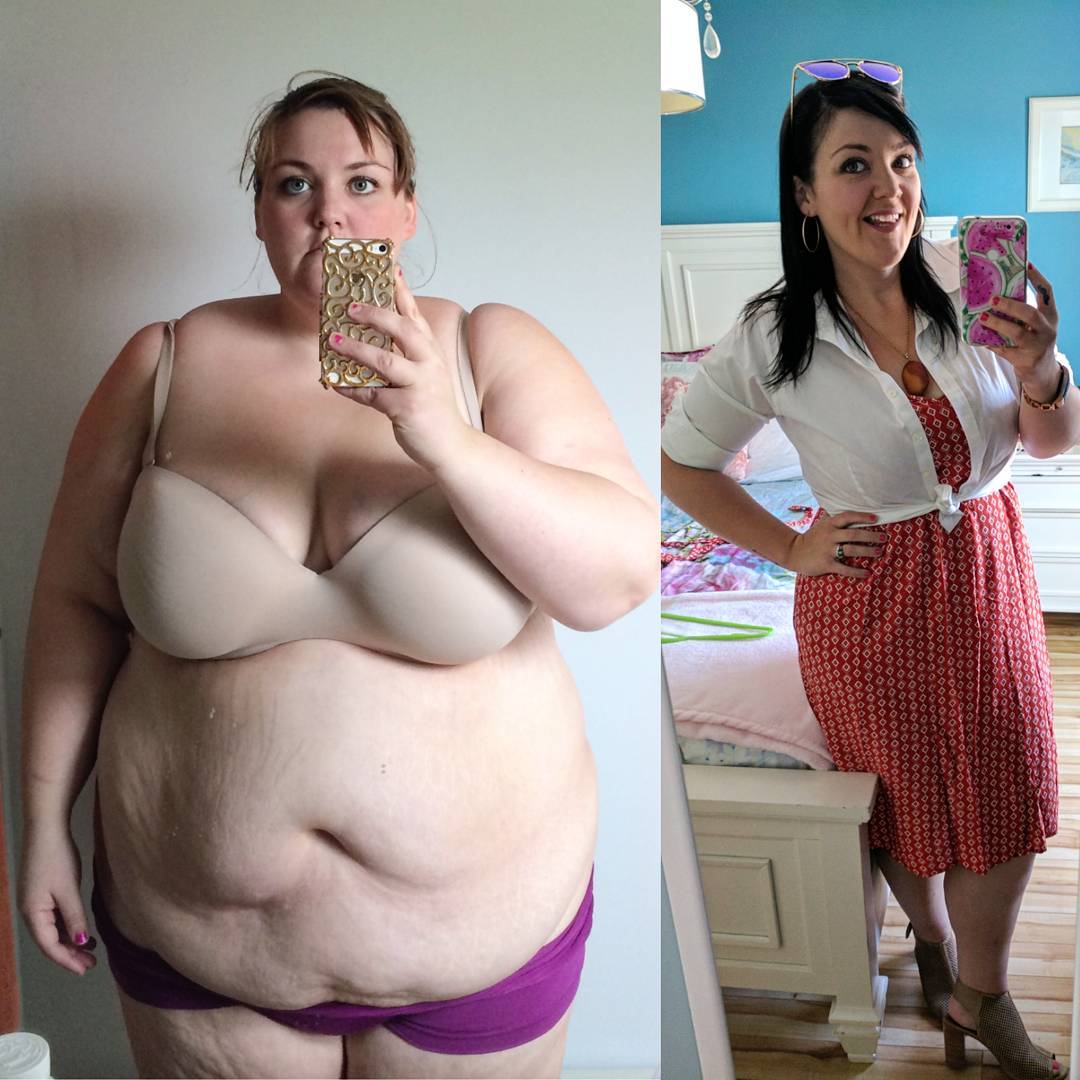 Mallory started on a costly programme, the Doctor Bernstein Diet, which saw her see amazing results for the first time in her life.

The programme’s cost soon became an issue after Mallory bought a house, and she could no longer afford the extra $600 a month. 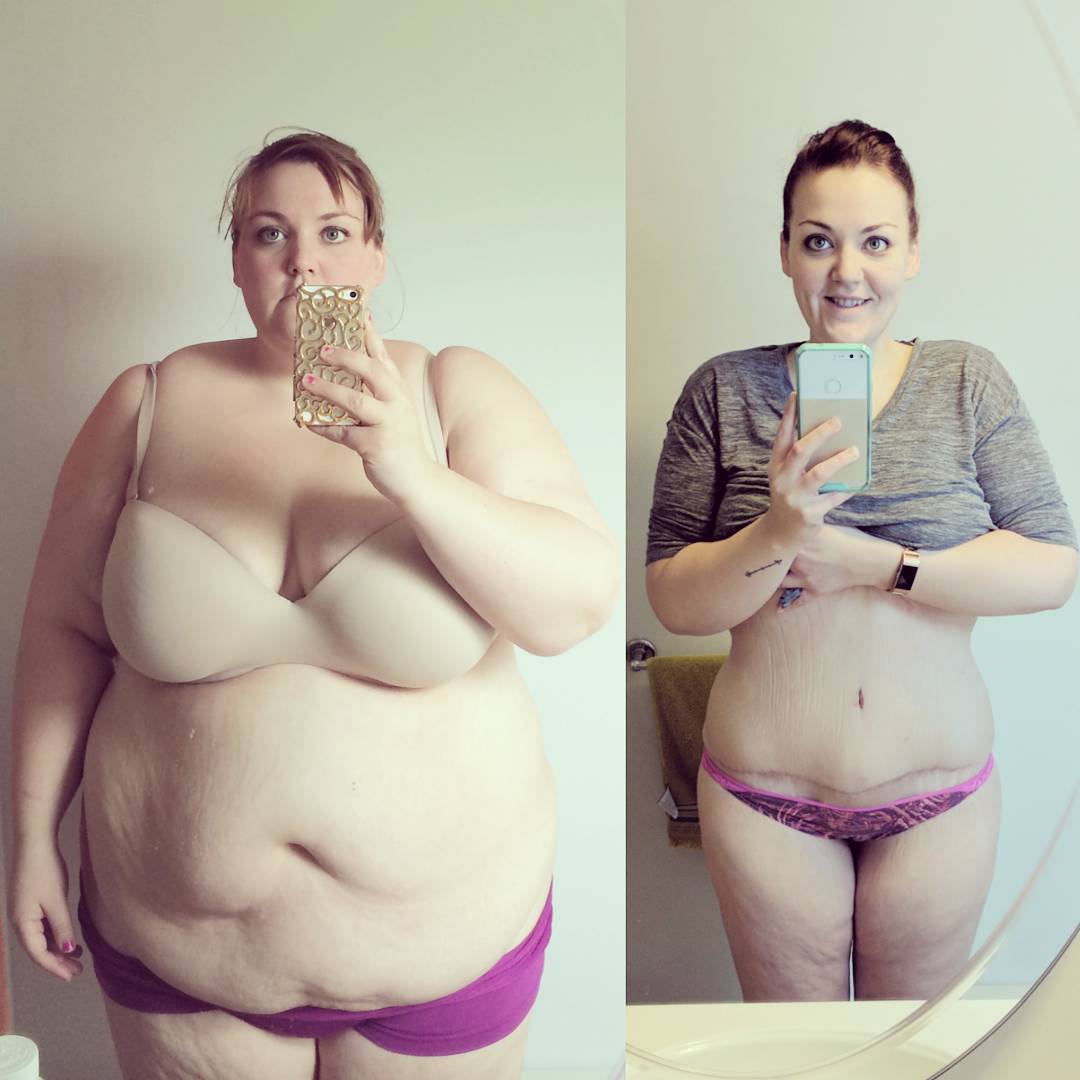 Trying to work through the plan herself, she slowly increased her meals to 1500 calories a day, but with a slower metabolism, the weight began to pile back on again and she saw another failure staring her in the face.

“That type of restriction is really so hard on your body. When I tried to have a more balance diet with whole foods, it just began to creep back on. I had a meltdown in my doctor’s office and that was when they recommended surgery.” 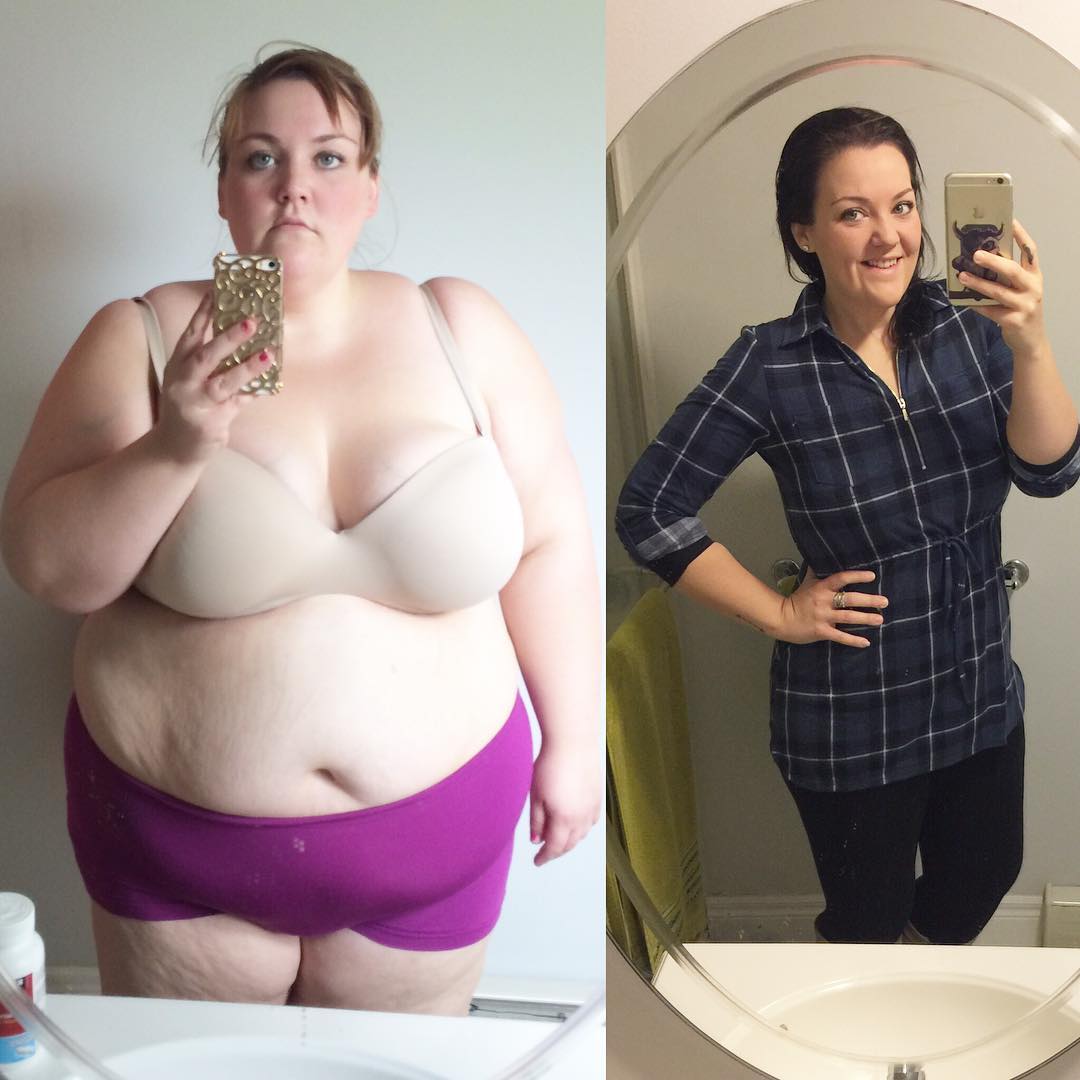 Far from being excited, Mallory didn’t like the idea at all, feeling like most people, that it was a cheat and not the ‘right way’ to lose weight, but the Doctor explained it was just a tool and the hard work and dedication would still need to be done.

“I hated the idea at first. I thought I didn’t need surgery, it seemed like the easy way out. I thought I could lose weight again naturally as I had done it before. I was so upset and I rang my sister crying. She was so supportive and told me to go for it. She knew I had always eaten well and tried to be active but nothing was working. In the end, I had to swallow my pride.” 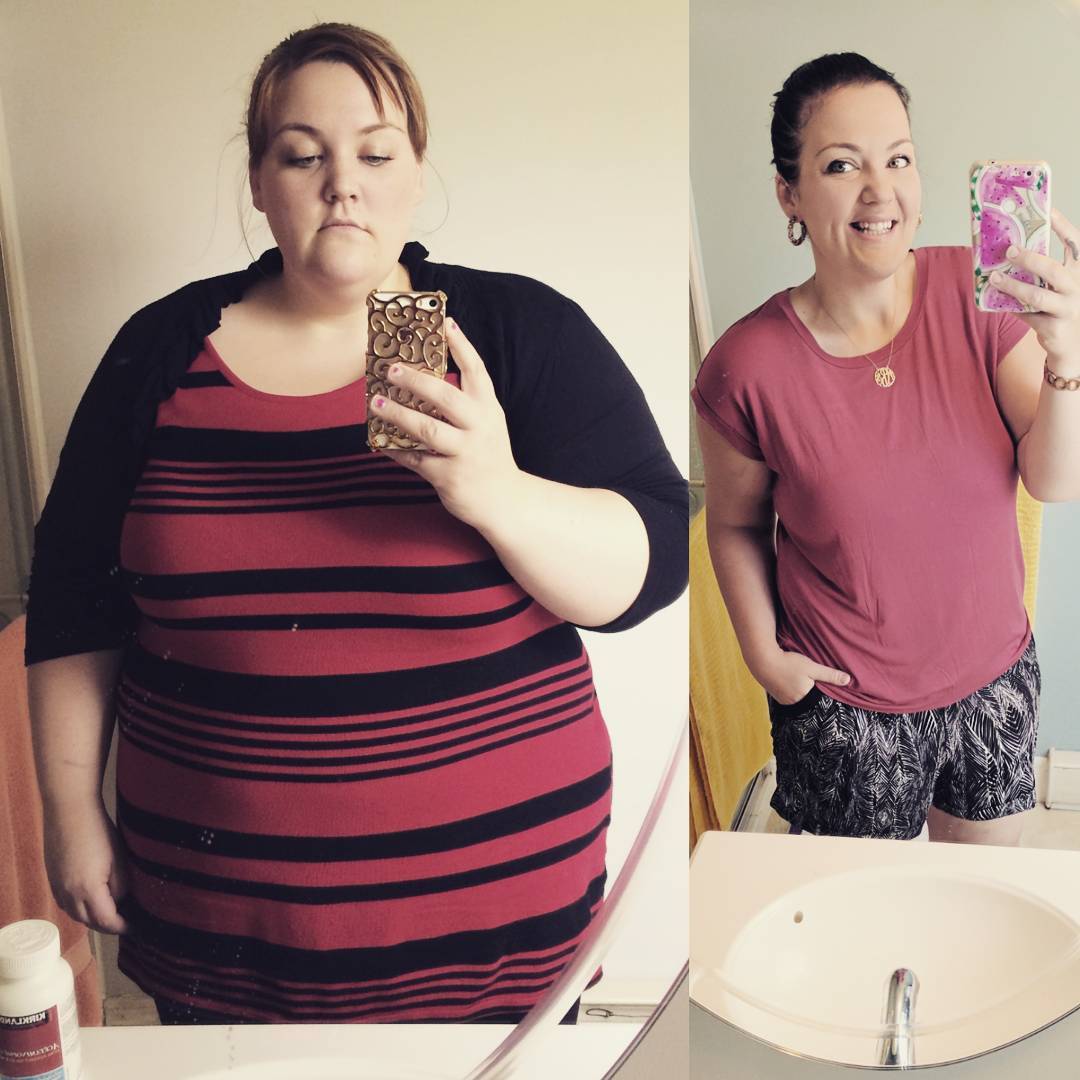 After many years of unsuccessful diets, Mallory finally took the doctor’s recommendation and booked in for RNY surgery for May 2014. As well as affecting her body, the decision also impacted her love life, as he fiancee didn’t want her to get the surgery and wanted things to stay as they were.

“I was engaged at the time. The surgery was scheduled for two months before the wedding. He wasn’t supportive and liked things the way they were. I think he thought I wouldn’t love him after I lost weight. We called off the wedding days before the date and never spoke again. It was the hardest thing but I had to choose to be happy. We both moved on and I hope he is happy.” 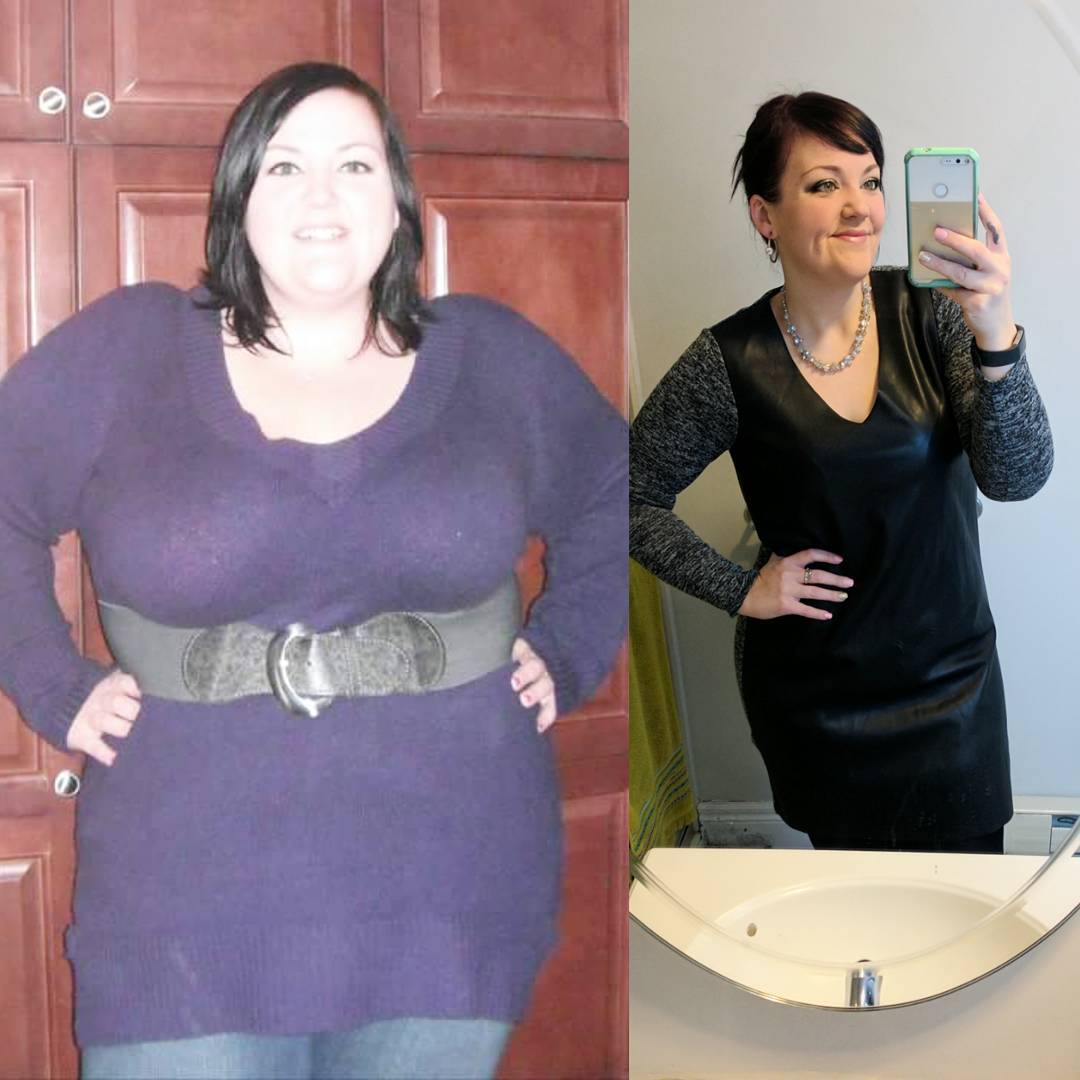 The surgery was a massive step, and proved to be a huge success. Mallory lost a steady, controlled and impressive 20 pounds a month for the first 6 months after surgery. She quit high carb meals and snacks and used tremendous portion control with everything she ate.

“It just shows how desperate I was. I just couldn’t do it by myself. I think that’s why I have been so open with it because I know how hard it is to ask for help. When you’re fat you can’t hide, it’s not a flaw you can hide, everyone sees it. The world is judging you and you feel so alone.”

“Everyone thinks you are lazy or you just don’t care. I had to ask for my help and that’s not something I should, or anyone should, feel ashamed of.” 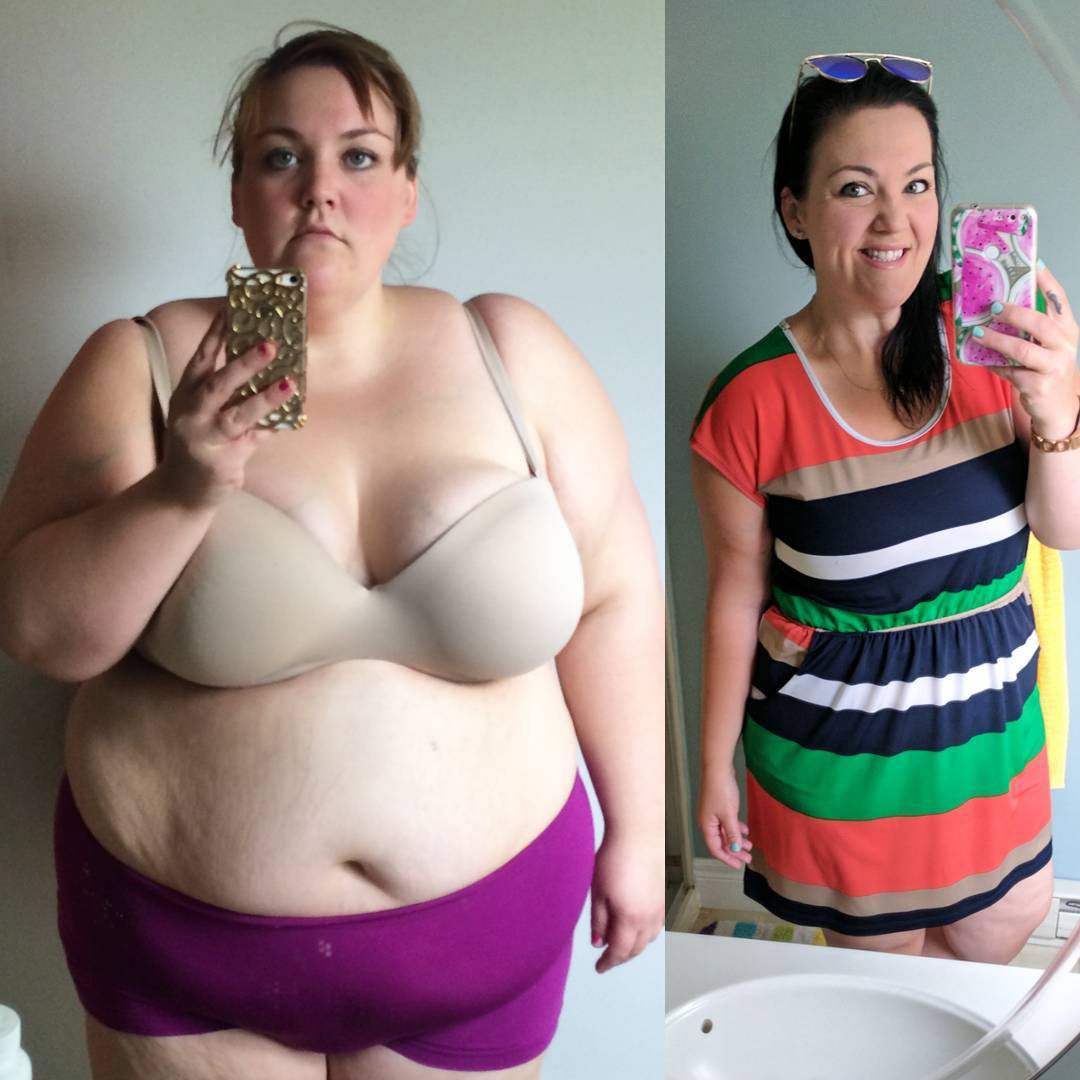 After her initial success, Mallory continued to drop weight and hit 187 pounds and got to her goal weight. She even surpassed her surgeon’s expectations of how much weight she could lose by 50 pounds. Proving her drive and hard work made the difference.

Like most people who lose such a large amount of weight, loose skin was a problem and Mallory made the choice to complete her transformation by having two skin removal surgeries.

“Initially the sagging skin was a badge of honour – it showed how far I had come. I had a goal of 185lbs but my surgeon didn’t think I would get under 230lbs. I proved them wrong and I was at a weight I could live a life that I loved. But in the end I no longer wanted the constant reminder and decided to have the surgery to remove it.” 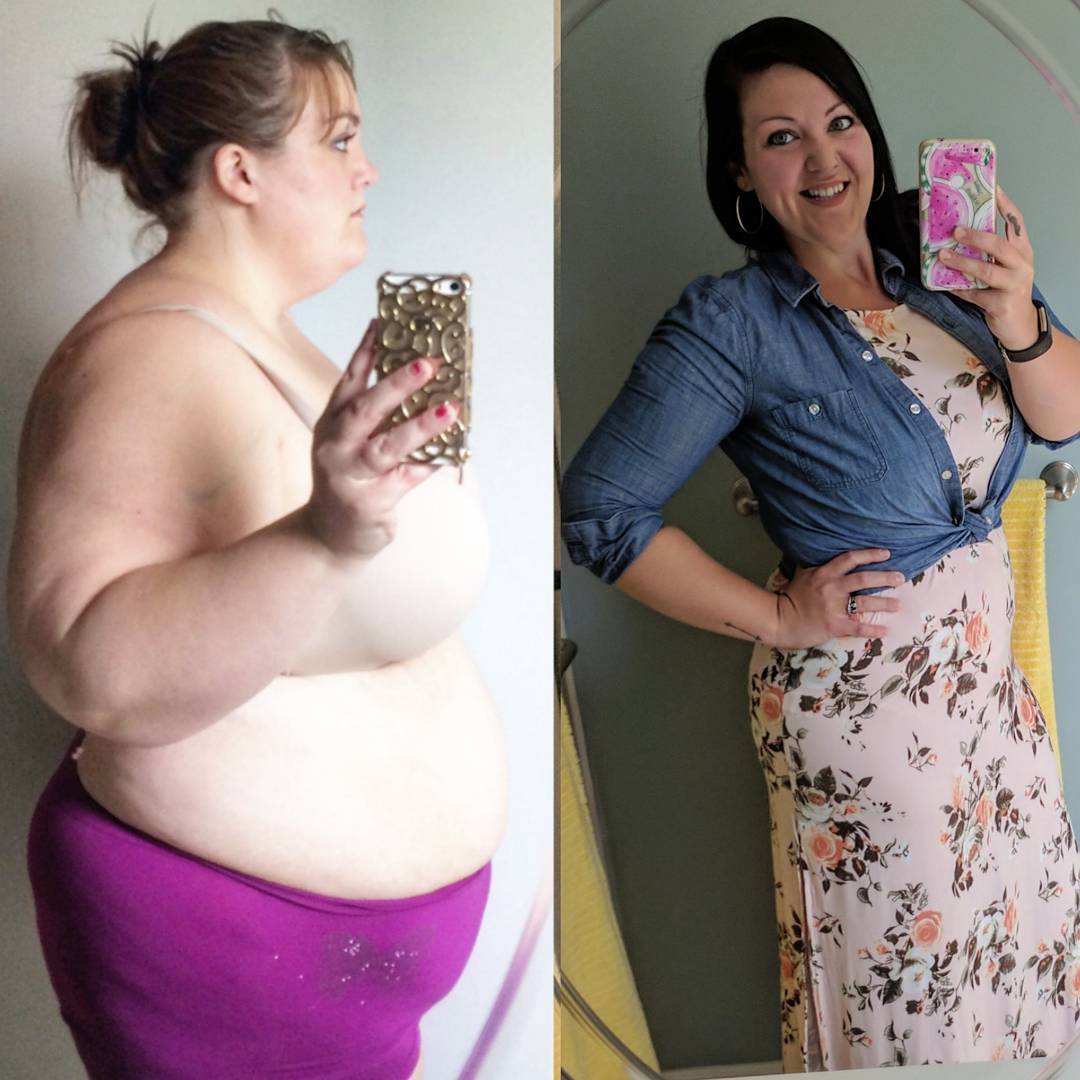 Mallory was finally able to completely celebrate her new look and show off all her hard work.

“After surgery, I sent a bikini photo to my mum and my sister and they both said how proud they were. It has not been easy that’s for sure. I now know that surgery is hard and recovery is much harder. I’ve made sacrifices and it is not the easy way out like I thought.”

“I live in a bikini now. I wear one every day, I am a bikini bum. After the surgery, I went out and bought five bikinis. For the first time I feel like the outside matches the inside.”

Mallory contines to live a a healthy lifestyle, performing cardio and kettle bell workouts every week as well as eating a calorie controlled, healthy diet.

16 Intense Chest Workouts That Will Lift & Firm Up Your Chest!

Labelle Reveals How She Finally Lost 40 Pounds After Years Of Failures!