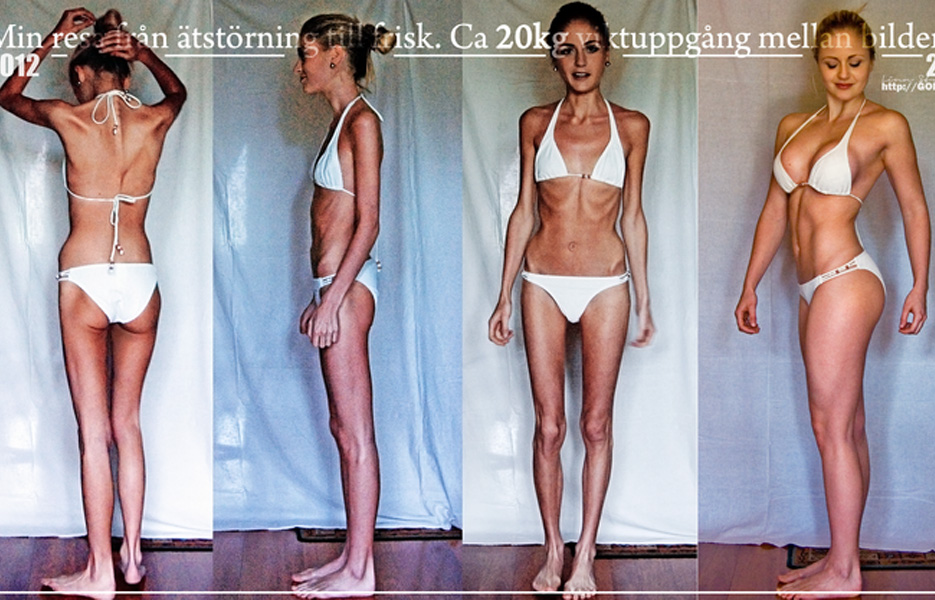 Linn, You Started Off With A Healthy BMI, What Initially Made You Want To Start Losing Weight?

I wasn’t pleased with my body. I had just graduated and moved back to my parents house to save some money before I got a job. Therefore, I had a lot of free time and needed something to do. I’ve always been a person who likes to accomplish things and set goals for myself. So I set my mind on losing some weight. Initially it was just to tighten up a little bit, but of course, I had no idea that it would escalate as it did.

What Were You Doing To Lose The Weight? Diet? Training?

In the beginning I just ate less, but when I was at my worse I weighed all my food (even the salad such as tomatoes… yep…) and ate no more than 200 calories per meal, often less than that. Depending on my workout (swimming, walks etc) I ate between 400-900 kcal/day. I never skipped any meals, it was the other way round, I was extremely fixated on eating every 3 hours.

I set my alarm clock on the phone so I wouldn’t forget to eat. When the phone rang it was time for my sacred moment – food. Everything had to be right. The right plate, fork, I had to be comfortable – no one was allowed to interrupt me and so on. I was extremely obsessed and planned my life around food. If you can call it “life”, I wasn’t living. My days consisted of anxiety and every movement was like torture to my body, I was so weak. It’s kind of scary, that you can lose your mind to a sickness like that.

You Can Check Out Linn Strömberg’s Social Media Here: 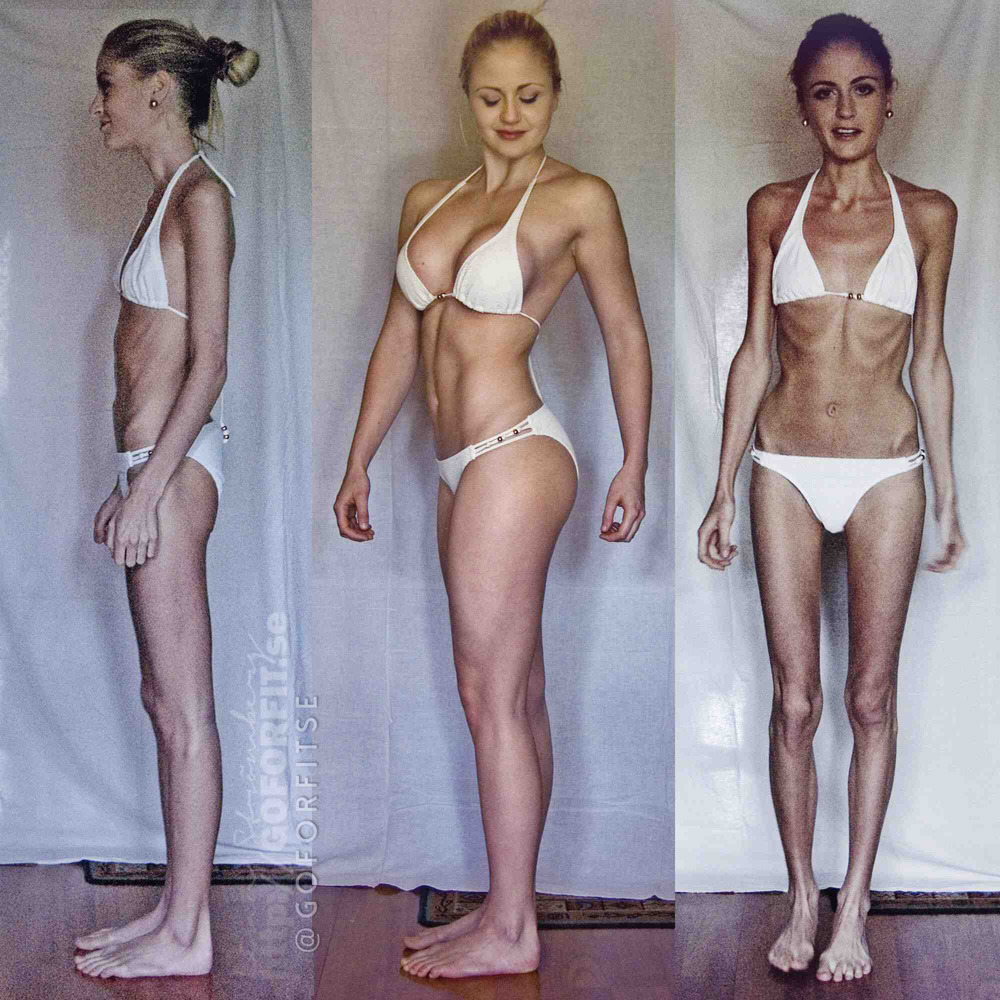 How Long Did You Stay With This Approach To Losing Weight?

I had trouble with my relationship with food for a long time, about 3 years, but never as extremely as what would come later. I got really sick in 2011 and managed to get well during 2013.

At What Point Did You Realize You Had Started Going Too Far?

I saw how people I hadn’t seen for a while started crying at the sight of my body, and I realized that I was hurting my loved ones. They couldn’t do a thing, just try to help and make me listen, and watch me while I disappeared more and more.

It was awful, but it’s so hard to just turn away from an illness like this. I was stuck in my Eating Disorder ‘world’, and I chose to ignore the fact that I didn’t just hurt myself but also the ones close to me, who were suffering just as much as I was.

When my mom and boyfriend began threatening to get me admitted, I got scared. I was older than 18, but when someone is becoming a danger to themselves you can be detained and put in hospital, or treatment facility, against your will. I got scared by the thought that someone else would decide that for me what and when to eat, so I began to gain weight. 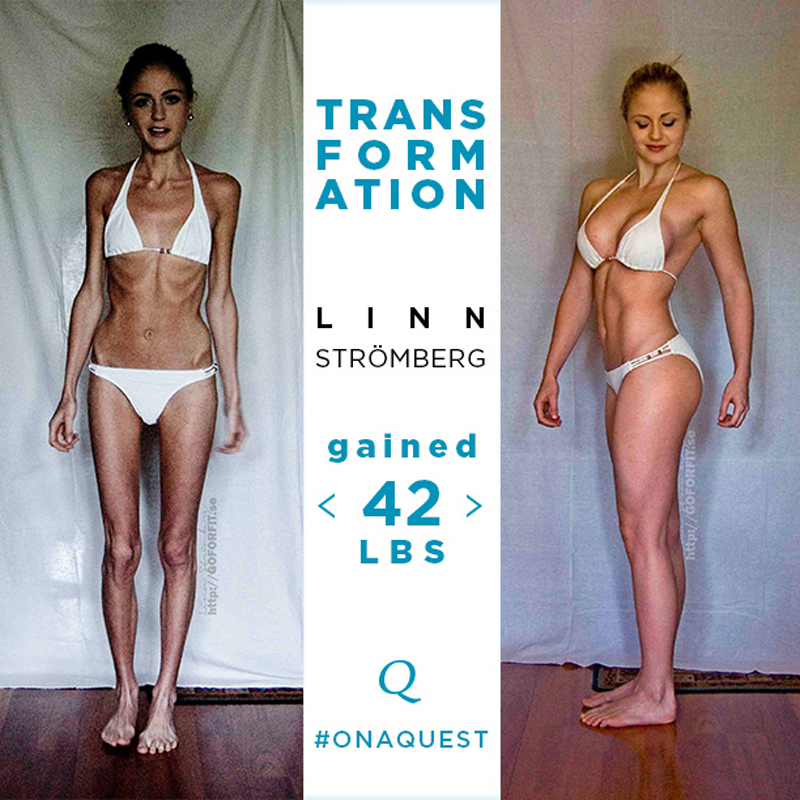 Did This Hit You All At Once Or Did You Realize The Problems Throughout The Time You Were Losing Weight?

I realized the problems throughout this time. But I chose to ignore them. As I said before, I did not how much I had hurt my loved ones, but the obsessions and the control over the food felt more important at the time.

On A Typical Day, How Did You Feel? What Did You Think Of The Body You Saw In The Mirror?

I was always cold, and weak. Not that surprising though – I didn’t eat. Anxiety haunted me constantly. I was buried in my own little dark bubble. I felt incredibly alone. But I wanted to be alone. Because if I were to spend time with someone, that could mean that I had to change my meal plan for the day, which I wanted to avoid at all costs.

The only one I hung out with was my boyfriend. But I rarely ate together with him, not even when I slept over at his place. I always had my own food with me, often liquid foods such as smoothies and just plain protein drinks. When we moved in together I always cooked the food. 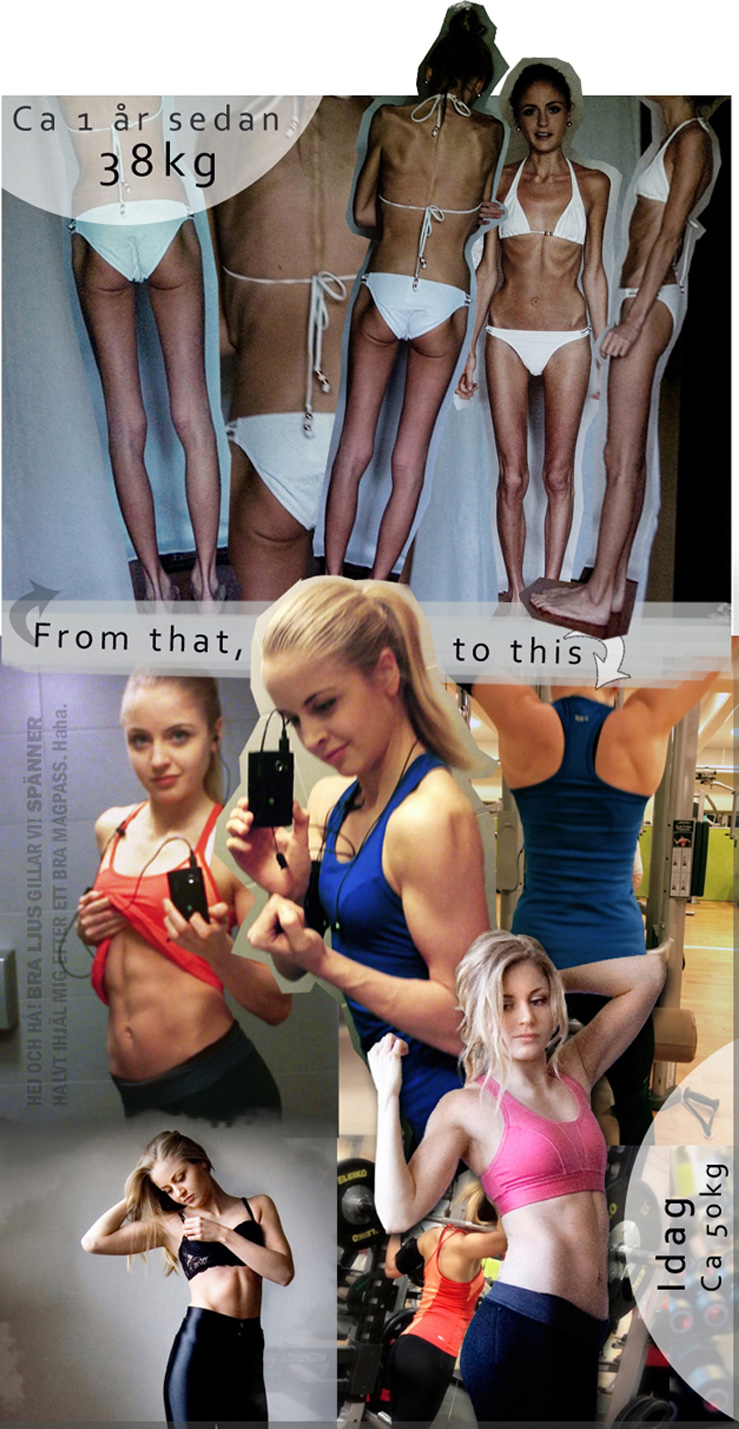 What Was The Turning Point, Were You Said “I Can’t Keep Doing This Anymore”?

It wasn’t me who made me take this decision. It was my beloved mother who finally put her foot down. She also made me realize I was doing things wrong. At first I tried to recover for everyone else, but during time I realized I was doing it for myself. I wanted to get well. You can never beat an eating disorder if you don’t want it yourself.

What Did You Change After This Moment?

At first I just focused on gaining weight – which meant more food. But the mental part was much harder to overcome. A big turning point was when I threw out the kitchen scale so I could no longer weight my food. The kitchen scale had been a vital tool for me during the eating disorder and was the source to lots of my problems, so I finally realized that I had to stop using it. 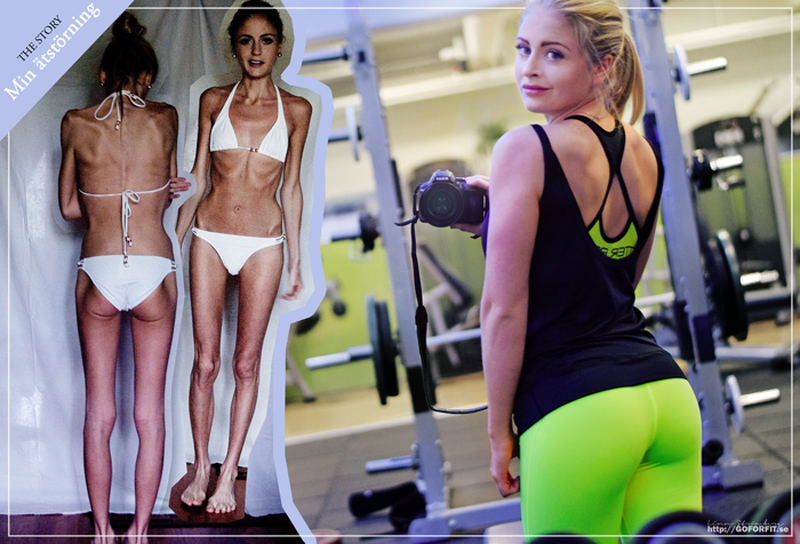 How Did Your Approach To Diet & Training Change After This Realization?

I stopped all the cardio training. My boyfriend convinced me to go with him to the gym and try out some weight-lifting. After the first session I was completely hooked. I was so weak, it was ridiculous, but I LOVED it. It was an amazing feeling to feel my body work and getting stronger, and I started to see food as something good. Fuel to my body.

I easily started to double the amount of food, and it was an amazing to feel the energy coming back to my body. See myself gaining weight and actually like it. The gym was really a big part in my recovery. But be aware – I don’t say it’s the key to recovery. It worked for ME, but it could easily been the other way around, a new obsession. It’s important to be honest to yourself, find your own path to recovery.

Dealing With An Eating Disorder, Did Any Problems Carry Over After Changing Your Ways?

It took some time for my hair to grow out properly again. I lost a lot during the eating disorder. And my body was for a long time unbalanced, I gained weight and got bloated easily, my period was irregular, got a sensitive stomach. I’ve had troubles with panic attacks for a long time even after my recovery. The longer an eating disorder progresses, the longer it takes for the body to restore itself. 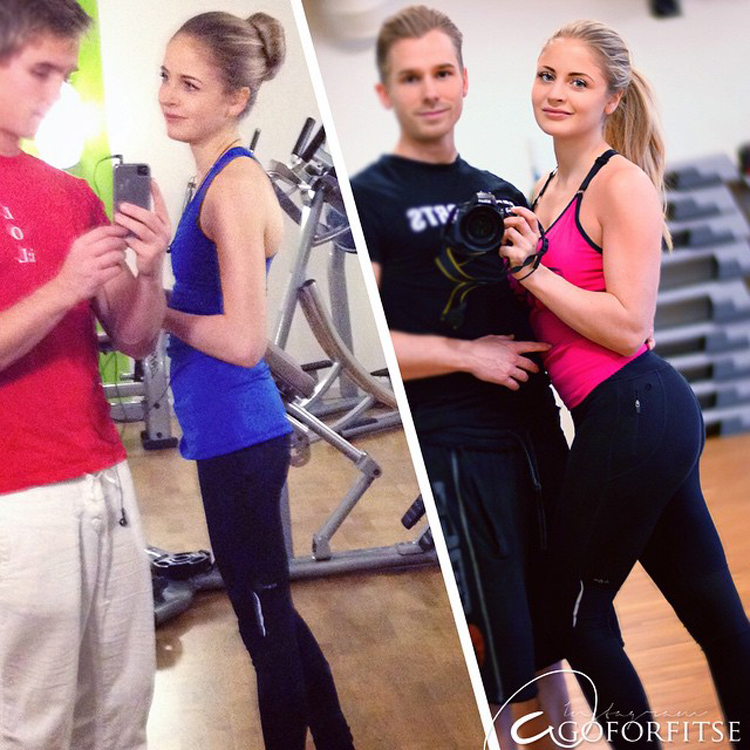 What Was The Hardest Part During Your Whole Transformation Journey?

To be honest, the whole journey was hard. All that anxiety all the time. I would not even want my worst enemy to experience something similar.

How Do You Feel Day To Day Now? Has Your Attitude To Your Body And Your Looks Changed?

I’ve changed my mindset completely. I love food and I love my body. Of course I have tough days, as all people experience from time to time, but I would never in my life hurt my body like that again. I’m now incredibly conscious when it comes to my thoughts about myself. I always listen to my body, and take rest days when needed. I really feel like I’ve found the perfect balance in my life, and it feels amazing.

How Were Your Family And Friends Throughout Your Journey?

Very supportive. They tried to help me as much as they could. But it’s hard to help someone who doesn’t want help and was as unbalanced as I was. I could get angry over the smallest things.

My boyfriend, who I lived with during this time had to constantly careful with his choice of words. The wrong words or tone in the voice could end up that I refused to eat. He often had to help me through anxiety attacks and explain to me that I “deserved” to eat. He is truly an amazing person, he was there for me every day and put himself aside to support me. Love him so, so, so much!

If Someone Came To You, In A Similar Situation To What You Were In, What Would Be Your Advice To Them? 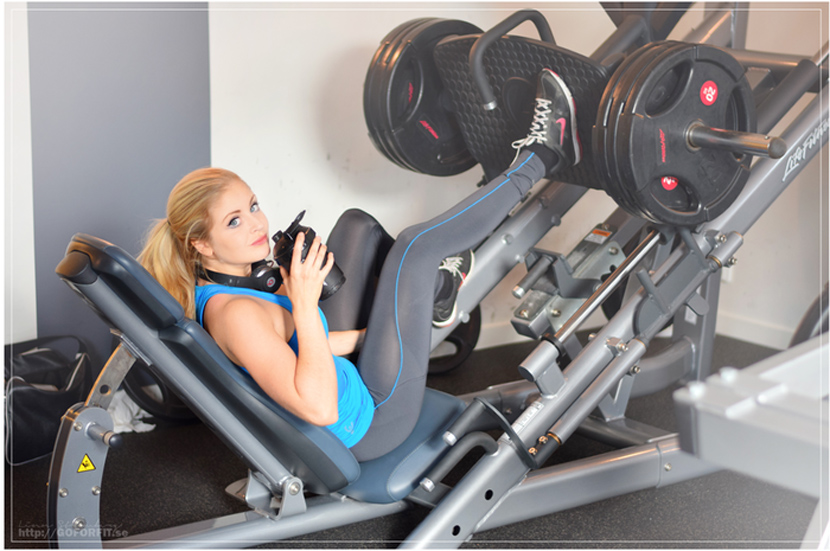 How Does It Feel After Completing Such A Remarkable Transformation? Now Having A ‘Goal’ Body For Most People And Also Knowing That You Have Helped A Lot Of People?

First, thank you so much for the kind words. And to answer your question – It feels kind of unreal. It’s weird to think back to the eating disorder and the person I was back then. It feels like i’m another person in those memories. I’m so grateful for being where I am today, healthy and happy. And that people are inspired by my journey, and in fact helping them is just a remarkable feeling. It’s just amazing. That me, little me, can help people. As I said before – if I can help just one person out there with my own journey and eating disorder it hasn’t just been a waste of those years.

What Are The Most Common Questions You Get Asked About Your Transformation And How Do You Respond?

How I did it. It’s defiantly the most common question. It’s from people who have a hard time gaining weight and people who are in the same situation I was in back then. I gladly try to help. The answer depends on the person’s situation and story – But to gain weight: You need to eat more than you burn. But the key is not to eat lots of junk food, the key is healthy food. Foods such as nuts, avocados, meat, olive oil, whole grain pasta, full fat products and so on. And lot of it. To beat an eating disorder you need to face you fears. Eat the scariest foods, stop counting calories, stop weighting yourself, stop those hours of exercise. Eat, eat, and eat. And, talk to someone. That’s important. You need to process all the anxiety.

Any Final Words Or Anything Your Would Like People To Know?

An eating disorder is not about your weight. You can be overweight and have an eating disorder. If you have problems with food – get help. It’s not embarrassing being “that skinny” and seeking help, as I know many people who have been there and they feel like I did. Don’t wait. Don’t let the eating disorder escalate.

Find Out How Brie Simeoni Lost 75 Pounds By Switching To A Keto Diet!

How Tiffany Went From XXL To S In Under 1 Year With This Diet!

How Powerlifter Adrienne Osuna Completely Transformed Her Body While Only Dropping 2 Pounds!

What Emma Louise Fitness Eats In A Typical Day To Transform Her Body!